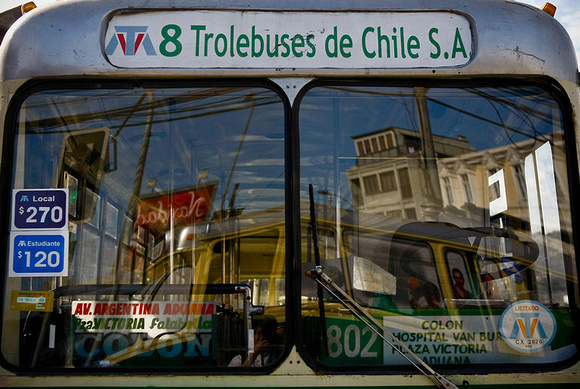 Letting go. Explore the history of Valparaiso living their very particular rhythms and tempos. Arguably, the experience of traveling by trolley is “the” way to feel Porteño.
Imported from the United States by the former transport companies of the State (ETC), the first 25 machines arrived at the port in 1953 as the first course had the stretch Baron-Plaza Victoria. Then spread to the Customs and Columbus Avenue. Today, these silent and colorful time machines cover almost the entire plane of Valparaíso with about 20 units.
Faster for some, slower for others, it is true that the presence of the trolleys in Valparaiso is an undeniable part of the identity and essence of the port and its heritage.
So much so that journeys to the neighboring city of Viña del Mar are a thing of the past, when the 60′s had trips that covered the road sector Quillota, Population and Chorrillos Vergara. Now the trolleys are a plus for those moving in the plane of the city that saw them arrive, Valparaiso.
The trolleys reach a speed of 60 km / h but it is better to slow down. In addition it can only move three meters on each side of the track where you are going the route of cables that allows electricity, which is its fuel.
Currently there are 14 lines of trolleys. Although there are differences in size, on average carry 30 to 40 people. The value of your tickets also varies, but not over $ 200.
No bar porteño not have a wink of these characters, porteño who do not know or abroad who has not noticed.
To learn more about its history, there are currently two units of the company Trollebuses Valparaiso intended to walk the streets of Valparaiso with a theater organized by the Ministry of Culture, which runs the most important milestones in the history of the port in 200 years .
©Luis Sergio
Con la tecnología de ZENFOLIO Acuerdo de usuario
Cancelar
Continuar