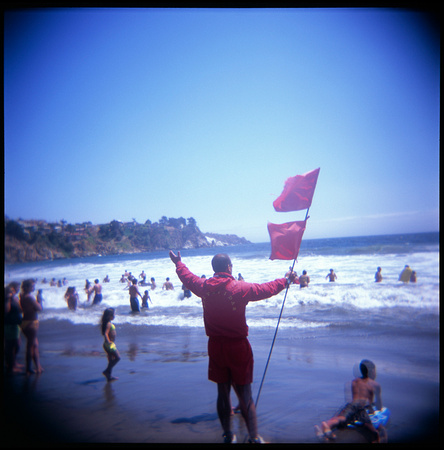 Chile has 4,300 kilometers of coastline, plus an impressive amount of islands. So it’s no coincidence that a Chilean is a creature of the beach. From the south or the north, born in the capital or the province, the sea, the sand are recurring destinations for family vacations, regardless of social status or economic class. However, with a just a closer look one realizes that the beach in Chile, just like the neighborhood park or sidewalk, is another front in which the rules of a highly segregated society are manifested. Where those that win are those that have more chips and those that lose bet with a few low value bills. The beach does not discriminate but rather segregates.


This photographic exhibition depicts the coasts of Chile, Peru and Colombia. But it’s in the first destination that the camera stopped in a greater number of beaches to put the lens on the customs, the animated faces, and the peculiar happenings that make them a favorite destination for many. In the V Region of Valparaiso, Algarrobo, Cartagena and Viña del Mar, the favorite of foreigners and official home of the classic Festival of Song of Viña del Mar- the beaches are portrayed with their colored, unending flow of tourists. Further to the south, to the coast of Osorno, in the Lakes Region (X Region) and Valdivia, in the Rivers Region (XIV Region), they appear as more placid landscapes where the presence of summer visitors is occasional, where the water is colder and the tide rolls in with greater rage. The cold wind obliges the visitor to cover their chest and behind their ears. But it’s there where one observes the real magic, where the sea and the fisherman speak the same language, where they communicate and confront once again just like in the stories of generations past.

Other photographs were taken in the beaches of La Herradura, in Peru, and in Cartagena de Indias, Colombia. The first, located in the Province of Lima, is a frequent destination for families, even though its favored visitors are surfers that arrive to test its rough waves. But in its attraction there is something else, a strange tradition in which a marveled diver dressed as a friar leaps from a cliff into the sea, invoking the legend of a priest that in the same spot, said farewell to his prohibited love and then committed suicide in the 19th century. The images dig up the importance that the custom and legend has for the community, even today, even though in the case of the Colombian beach the purpose goes more for the relevance of a common ritual than a folk narration.
Cartagena de Indias, the capital of the Bolívar Department, dates back to 1533 when it was built as one of the most important ports of the continent and refuge of the riches and treasures of the Spanish Crown. Currently it’s a tourist gem by nature. Its palaces, magical pathways, forts and old walls, as well as its turquoise and ivory beaches, are a treasured destination for thousands of visitors. But this is not what the photographer wanted to capture when looking through his lens and shooting a group of fisherman that threw their nets into the sea from the damp eaves, under the Colombian sun. In this moment he captured, just as in the beaches of Southern Chile, a relationship between something human and the environment that transcends the contemporary reality. Another code, another perspective, another language that recovers the origins of civilization. The beach pulls at man from his most intimate fibers, from an essence that survives, as the conscience of oneself, despite the passing of time.
©Luis Sergio
Con la tecnología de ZENFOLIO Acuerdo de usuario
Cancelar
Continuar