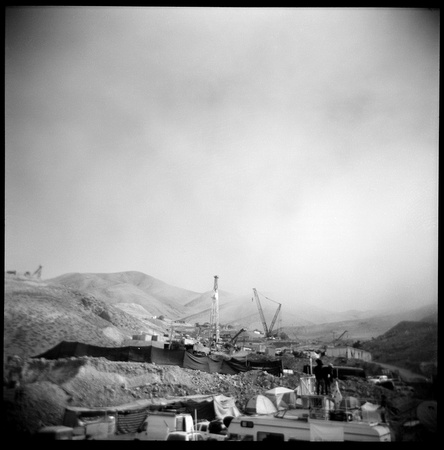 On August 5, 2010 dramatic news paralyzed an entire country. Pressed to a radio speaker in one of the Transantiago public buses or glued to the screen of a television, Chileans learned of the 33 countrymen trapped 720 meters below ground, in the depths of a gold and copper deposit known as the San José Mine, 30 km northeast of Copiapó. The uncertainty arrived immediately: the probability that any survivor remained became an instant question and urgent speculation ensued.
But a miracle occurred. On August 22, when the machines finally reached the refuge, where only a hopeful heart could anticipate that a survivor would be found, the probe brought to the surface a small scrap of notebook paper, the edges folded and ripped, where it read in red letters the famous phrase “we’re ok in the refuge, all 33”. The extraordinary message became the insignia of a country whose President – Sebastián Piñera- traveled later to the isolated corner of the desert, holding there an extract coming from the depths of the earth, and it transformed into a proud icon of survival of Chile and its people.
On Wednesday, October 13th, more than two months after the collapse, the 33 miners were brought to the surface. The men arrived upright, alive, and Chile as a whole celebrated the rounded success of the operation at a moment in which the country, and the sitting government needed to score a victory. Only eight months after the fateful 8.8 grade earthquake, many localities accused serious fallacies in the reconstruction work and the public opinion debated the grade of responsibility of the authorities in the deaths resulting from a tsunami alarm that never arrived in time.
During the two month long rescue labor, the San José mine became a particular setting. Outside the deposit, the Esperanza Camp was formed, composed of family members of the buried miners, curious onlookers from all of the country, authorities and workers holding down their shift, and a thirsty press that found in this space a source rich with stories to supply to the newscast. It was this refugee that saw the birth of hope, the joining of forces and formed a community that only had in common the good omens for those 33 men.
Like an urban slum that falls without warning into the banks of the Mapocho River or between the gorges of the hills of Valparaiso, Camp Esperanza was an improvised oasis of dreams and desires in the middle of the Atacama Desert. And just as it came, it went, with the arrival of the good news and the departure of the families that returned to their homes after the rescue finished. But the retreat left behind the traces, rubble and remnants of improvised structures, high altars lifted below an infernal sun and legends written with white paint between the rocks. Remains that will stay there, in the midst of silence and nothing, awaiting one day when a country, in search of good news, remembers them once again.
©Luis Sergio
Con la tecnología de ZENFOLIO Acuerdo de usuario
Cancelar
Continuar