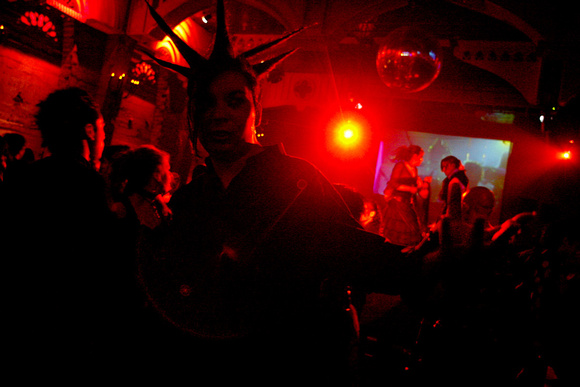 Chile is a country who is still in the process of constructing a cultutal identity.. Hence, it is a fertile ground for the coupling currents and trends from around the world. It is in this space where urban tribes form, the wing of a personal quest starring the young and teenagers, many from vulnerable social sectors. Born this way, camouflaged in the streets of Santiago cement, parallel citizens whose imagination can be located far from the city reality in worlds of magical codes and future dreams.

In Chile, the first otakus emerged in the mid-nineties, thanks to the globalization of Japanese anime culture. The word refers to someone who suffers from an obsessive fanaticism for this kind of animation. In Japan, the concept can be pejorative, but in Chile it is reflected in a more urban tribe. In the late 2000’s, with the explosion of Internet in homes, a wave of “otakus” appears with greater force, composed of teenagers –the majority born during the ‘90’s- that begin to occupy public spaces and go outside in costume, to the astonishment of the traditional Chilean. Hair dyed and formed to make points, dresses of old housemaids or of Asian schoolgirls, with garters, large platform shoes, eyes and lips covered with black paint, color, cat ears, and other things to complete the looks.

But at first, in a country where the average age of its citizens is over 30 years, the emergence of otakus was not interpreted as an exchange of influences but was quickly linked to an aesthetic and earlier cultural movement that has achieved a tremendous global impact: gothic. This current is expressed not only through the aesthetic but also through music, literature and even architecture. Gothic emerged in the mid-’80s from a decadent punk movement that fails to shake the foundations of contemporary society as originally professed. Its adherents are characterized by a deep sense of not belonging and a sensitive perception of life, reflected in the love of poetry and the arts. Coming out at night, they hang out in cemeteries, underground clubs and under low light and few prejudices. In Chile, their tendency has managed to survive. Perhaps their critical attitude and aloofness has found a strong hold in the profound social injustices that during over 40 years had to be endured by a fearful population and gagged by human rights violations during the dictatorship.
©Luis Sergio
Con la tecnología de ZENFOLIO Acuerdo de usuario
Cancelar
Continuar