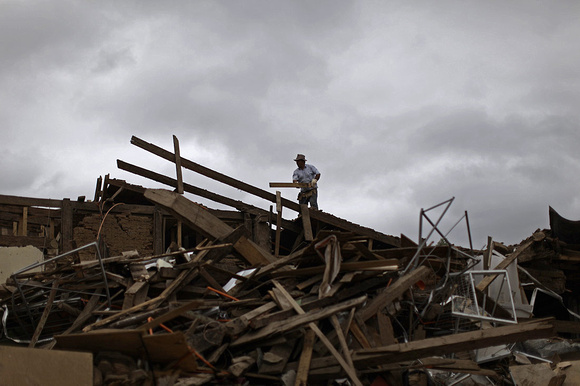 3:34:14 local time. (UTC-3). On Saturday, February 27, 2010, for about 2 minutes 45 seconds, Chile experienced an earthquake measuring a magnitude of 8.8 º Richter, with epicenters off the coast of Curanipe and Cobquecura, about 150 miles northwest of Concepción and 63 miles southwest of Cauquenes.
The areas most affected by the earthquake were Valparaíso, Metropolitana de Santiago, O’Higgins, Maule, Bíobío and La Araucanía, which account for more than 13 million people, about 80% of the population.
The earthquake reached Mercalli intensity IX in the regions of Maule and Biobío, wiping out much of the city as the Constitution, Concepción, Cobquecura and the port of Talcahuano. Many cities of great architectural value were destroyed almost completely, with irreparable damage.
The death toll reached a total of 525 deaths. Close to 500.000 homes were damaged and a estimated total of 2 million homeless in the worst natural disaster experienced in Chile since 1960.
The quake is considered the second strongest in the country’s history and one of the six strongest recorded by humanity. Is second only to national level by the cataclysmic earthquake of Valdivia in 1960, the most intense human-recorded by seismometers. The Chilean earthquake was 31 times stronger and freed about 178 times more energy than Haiti’s devastating earthquake occurred the previous month.
©Luis Sergio
Con la tecnología de ZENFOLIO Acuerdo de usuario
Cancelar
Continuar